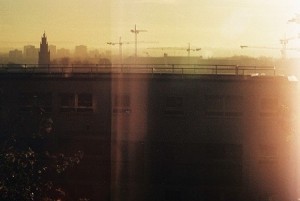 An excellent, detailed introduction to the application of the term “hauntology” to music is at Rouge’s Foam here. The term was coined by Jacques Derrida in Spectres of Marx. It plays on “ontology”; the two terms sounds almost identical in French. He asserts that the spectre of Marx’s ideas will continue to haunt Western consciousness in the same way that the spectre of communism was haunting Western Europe when Marx wrote the Communist Manifesto.

In music it has come to be associated with artists such as Burial, Boards of Canada and the Ghost Box label (see the Rouge’s Foam post for listening). However, its application is much broader than music. Here it is discussed in relation to visual art. As theorist Mark Fisher notes here, hauntology can be seen as a paradigm for the malaise of postmodernism, a static world haunted by the ghosts of the past after Francis Fukuyama’s The End of History.

The post by Alex Williams to which Fisher responds can be found here.

One thought on “Hauntology”