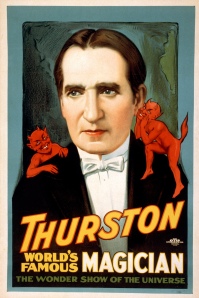 Researchers from Edinburgh University have claimed to show that stage illusionists and magicians rely on the phenomenon of “change-blindness” for their tricks. Although we may feel that we normally have visual awareness of an entire stable scene all at once, experiments show that subjects can be surprisingly bad at noticing large-scale changes that occur right before their eyes. In fact, our eyes “saccade” around a scene, very rapidly shifting a very narrow point of focus. Changes that occur during such shifts and outside the narrow range of focus will not be noticed by the subject.

Change-blindness, along with various similar surprising experimental results in psychology, was brought to the attention of philosophers by Daniel Dennett’s magnum opus “Consciousness explained” (1991). Such results might seem to provide a challenge to the traditional idea that the nature of our own conscious experience is infallibly and self-intimatingly revealed to us. We seem to be aware of an entire stable visual scene all at once, and yet these experiments show that we are not really visually conscious in this way. This allows a gap to open up between how one’s own experience seems to one and how it actually is. This can seem paradoxical – it has seemed plausible to many that the nature of one’s own visual phenomenology is exhausted by how it seems to one. It also raises the issue of whether one’s brain “fills in” details of a scene when one is not directly focusing on them, providing an illusion of unchanging stability even when the scene one is looking at undergoes quite large-scale changes.

One thought on “Philosophy of Illusions”