Violent computer games desensitise people to violence. This is normally considered a bad thing, but perhaps this is not necessarily so. Soldiers in a warzone face a situation in which they must encounter extreme violence routinely, and a survey has revealed that playing violent computer games might well help soldiers cope with this prolonged exposure to the extreme violence of war. To be more precise, the survey revealed that soldiers who frequently played computer games that involved war and combat experienced fewer violent dreams, and when these dreams did occur they reported feeling lower levels of fear and aggression compared to their non-gaming colleagues. The gaming soldiers reported feeling more able to “fight back against whatever forces were threatening them” in their nightmares.

It’s not difficult to formulate a plausible theory that would go some way towards explaining this data. Certainly, it seems clear that the desensitising effect of playing computer games could be a contributory factor. It’s quite unremarkable that soldiers who frequently encounter war as a game – albeit in the artificial context of a computer game – subsequently find the actual reality of war less threatening when they encounter it in their dreams. They learn to associate war with a game, perhaps as a game, and as a result their natural inclinations of fear and abhorrence are suppressed. But as a philosopher who possesses a passing, though not-insignificant, level of interest in psychoanalysis and the work of Sigmund Freud, I wonder if a more interesting explanation and investigation might be available to us… END_OF_DOCUMENT_TOKEN_TO_BE_REPLACED

Tonight is the night of the 7th British Academy Video Games Awards, a ceremony which since 2003 has rewarded the creators of virtual environments that have had men, women and children alike frantically throwing their thumbs around all year. The host of the event, comedian Dara O’Briain, defended the right of the video game genre to be considered a form of art in an interview this morning for the BBC’s breakfast show, against the initial (and perhaps persisting) incredulity of his hosts.

The problem facing O’Briain is not one that has eluded treatment in the field of contemporary aesthetics and the philosophy of art. As surveyed by Grant Tavinor for Philosophy Compass, some interesting questions begin to emerge when the conceptual analyses of traditional philosophical aesthetics are applied to the increasingly sophisticated worlds of computer games. END_OF_DOCUMENT_TOKEN_TO_BE_REPLACED 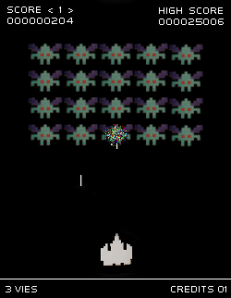 Earlier this week on the NYT’s Economix blog, David Leonhardt speculated that, in fact, violent video games might be partly responsible for the level or declining rates of violent crime during the current recession.  He cites earlier research suggesting that violent movies reduce violent crime.