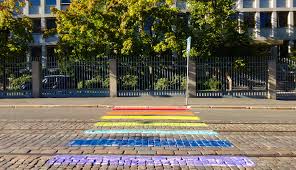 While scholars have become increasingly attuned to the geographies of LGBT in/tolerance across the world’s countries, the ways in which the global and national dimensions of LGBT politics are tied to the world’s cities have received limited attention. This is a particularly important omission since we are seeing sexual difference increasingly marshalled as a symbol of “progress” and “modernity” for the purposes of fostering national and urban competitiveness in various contexts. The symposium puts work on sexuality and the city into conversation with debates on global urbanism to provide a framework for understanding the “worlding” of queerness that focuses on the relationships between globalization, urbanization and sexual politics. 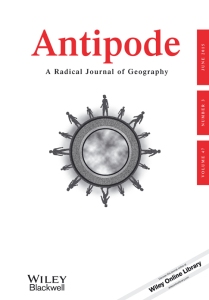 Queer Worldings: The Messy Art of Being Global in Manila and New York
Martin F. Manalansan IV (University of Illinois at Urbana-Champaign)

The Queer Afterlife of the Postcolonial City: (Trans)gender Performance and the War of Beautification
Bobby Benedicto (McGill University)

Welcoming the World? Hospitality, Homonationalism, and the London 2012 Olympics
Phil Hubbard (University of Kent) and Eleanor Wilkinson (University of Leeds)

Pinkwashing, Homonationalism, and Israel-Palestine: The Conceits of Queer Theory and the Politics of the Ordinary
Jason Ritchie (Florida International University)

Queering Critiques of Neoliberalism in India: Urbanism and Inequality in the Era of Transnational “LGBTQ” Rights
Svati P. Shah (University of Massachusetts, Amherst)

Limits of Dissent, Perils of Activism: Spaces of Resistance and the New Security Logic (pages 671–688)
Merav Amir and Hagar Kotef

Rêve Général Illimité? The Role of Creative Protest in Transforming the Dynamics of Space and Time During the 2012 Quebec Student Strike (pages 770–791)
Jennifer Beth Spiegel

Today marked the penultimate day of Wiley-Blackwell’s first Virtual Conference. As I am sure you will all agree, thus far, each day has contained many gems, and today has been no different. Eileen Joy’s (Southern Illinois University Edwardsville) keynote lecture: ‘Reading Beowulf in the Ruins of Grozny: Pre/modern, Post/human, and the Question of Being‐Together’ looks at the aftermath of the Russian bombing of Chechnya through the lens of Beowulf.

The two final papers of the conference were provided by P. Grady Dixon (Mississippi State University) & Adam J Kalkstein (United States Military Academy) and Nicole Mathieu (CNRS, University of Paris). Their papers respectively entitled: ‘Climate–Suicide Relationships: A Research Problem in Need of Geographic Methods and Cross‐Disciplinary Perspectives’ and ‘Constructing an interdisciplinary concept of sustainable urban milieu’ have looked at indisciplinarity from a geographical and environmental perspective.

The final publishing workshop was ‘How to Survive the Review Process’ by Greg Maney (Hofstra University). Although, the conference is due to end tomorrow it is not too late to register and take advantage of the book discount and free journal access. Each of the papers and podcasts will remain on the website, and it is hoped that you will keep the comments coming in.