When the wheel was invented the man whose job it was to carry things must have been devastated. When the dishwasher reared its watery head, the trade union for human dishwashers mush have been appalled.  Now with the invention of a new super computer called “Watson”, made by IBM, able to beat the two most prolific players of the TV show Jeopardy, are we on the way to a world run by machines? It seems a silly question; that is, on the strength of a computer being able to mimic human linguistic decision making. However, if we are getting this far, how much further can we go?

Back in 1966 Joseph Weizenbaum created “ELIZA”, a relatively simple computer program which was meant to simulate a psychotherapist. The program worked largely by rephrasing a patient’s statements as questions which were then posed back to the patient. Many subjects reported preferring ELIZA to their human therapists, and some continued to value ELIZA’s therapy even after Wiezenbaum revealed ELIZA’s workings. (You can read a transcript of ELIZA in action here.)

Things have moved on somewhat since ELIZA’s day. Maja Matarić, a Professor of Computer Science at the University of Southern California, has developed Robots that can provide advice and therapy to patients who have suffered strokes, or who suffer from Alzheimer’s. The Robot can monitor the patient’s movement as they perform a regime of physical therapy, using a combination of laser scanners and cameras, and provide encouragement and advice. But even more impressively, the robot can monitor how introverted or extroverted the patient is, and tailor the tone of their advice giving accordingly. One stroke patient reported much preferring the robot’s advice and encouragement to that of her husband . . .

END_OF_DOCUMENT_TOKEN_TO_BE_REPLACED 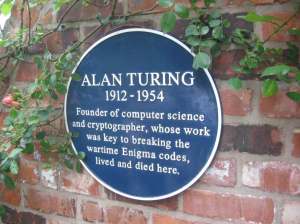 It is unusual for a philosopher to be the subject of headline news. However, in recent days the media has widely covered a high-profile campaign seeking an apology to Alan Turing from the British Government .

Of course, Turing was not just a philosopher: in academic terms, he was primarily a computer scientist, although he is perhaps most widely known outside of academia for his work at the code-breaking institute Bletchley Park during World War II, where he was a major contributor to breaking the Nazi ‘Enigma’ codes. Nevertheless, his contribution to the study of artificial intelligence provoked much debate in philosophy by way of his Turing Test. END_OF_DOCUMENT_TOKEN_TO_BE_REPLACED