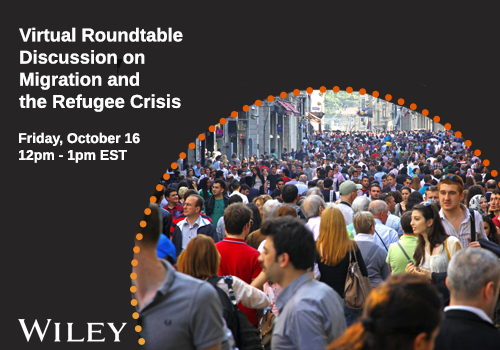 At the end of 2014, there were an estimated 19.5 million refugees worldwide. This crisis was drawn once again into sharp light as Syrian refugees flooded Europe in recent months. Many of these people are families with children, forced to flee their homes or risk their safety.

Join us Friday, October 16, 12:00pm – 1:00pm EST for a virtual roundtable discussion on migration and the refugee crisis. Our panel of experts span the social sciences and humanities to examine issues of refugees and migration ranging from ethics, family studies, and geo-political. Register today as seating is limited!

He is a labor activist who founded the New York Unemployed Committee, Lower East Side Community-Labor Coalition and labor organizer for several unions.

Dr. Serena Parekh is an Associate Professor of Philosophy at Northeastern University, where she also holds the position as Director of the Politics, Philosophy, and Economics Program. Her primary research interests are in social and political philosophy, feminist theory, continental philosophy, and the philosophy of human rights.

Dr. Parekh has contributed to noted journals such as Hypatia, Philosophy Compass, and The Southern Journal of Philosophy. She is also the Editor of the APA Newsletter on Feminism and Philosophy.

Dr. Reenee Singh is a family therapist based in London at the House Partnership. She is also Co-Director at the Tavistock and UEL Family Therapy and Systemic Research Centre as well as Editor of the Journal of Family Therapy.

Singh holds a particular interest in the intersection of therapy, race and culture. She attributes her personal history and cultural context, growing up in India and having lived and worked in Singapore, as an influence her approach to therapy, research, supervision and training.