Recent headlines boast that string theory is finally testable.  If true, this would mark a significant turning point for the speculative theory.  Touted as a potential TOE, or theory of everything, string theory attempts to unite general relativity (our best theory of the very large) and quantum mechanics (our best theory of the very small).  The theory has been around for decades, but has yet to make a single, testable prediction.  The problem lies in the fact that string theory has so many independent constants, it can accommodate almost any empirical data.

Until now, argues Michael Duff of Imperial College, London.  According to a PhysOrg report, the insight came when Duff attended a “conference in Tasmania where a colleague was presenting the mathematical formulae that describe quantum entanglement: ‘I suddenly recognised his formulae as similar to some I had developed a few years earlier while using string theory to describe black holes. When I returned to the UK I checked my notebooks END_OF_DOCUMENT_TOKEN_TO_BE_REPLACED

There is a new book I’d like to read: Quantum: Einstein, Bohr, and the Great Debate about the Nature of Reality, by Manjit Kumar.  The book is a non-technical account of the discoveries and arguments that led to the Theory of Quantum Mechanics we rely on today.  According to Graham Farmelo’s review of Quantum in the New York Times last month, the book is full of interesting anecdotes about the physicists, their ideas and their disagreements.

Early quantum mechanics is often portrayed as a battlefield from which Bohr emerges victorious while Einstein recedes into the background.  Bohr’s view is now taught to almost every undergraduate physics major and philosophers routinely refer to his view as the ‘Standard Interpretation’.  However, END_OF_DOCUMENT_TOKEN_TO_BE_REPLACED

Now that LOST has officially ended after six seasons, the question being asked is “was this a ‘long con?'”  Those of us who have been there since the beginning and stayed until the end are likely to have mixed feelings following this week’s finale, though the fact that there remain unanswered questions cannot be too much of a surprise.  Lost is well known for its elaborate and suggestive use of Eastern and Western mythologies, and for characters named after philosophers from the obvious (Bentham, Hume Locke, Rousseau) to the cleverly concealed (Bakunin, Burke, Godwin, C. S. Lewis) and the downright obscure (De Groot, Baba Ram Dass).  In addition, many scientific theories – including quantum mechanics, time travel, atomic energy and electromagnetism – all play an central part in the plot of the show alongside more fundamental philosophical questions about truth, identity, memory and morality.

Given the range and complexity of the ideas that make an appearance, and compounded by the temporal dislocation which serves as the show’s leitmotif, it’s no wonder that casual viewers started to feel increasingly ‘lost’ with a show  which finally ran to more than 90 hours. But it is undoubtedly the complexity and openness to interpretation which is woven into the narrative structure of the show that makes it such a flexible forum for exploring philosophical themes in a pop culture context. END_OF_DOCUMENT_TOKEN_TO_BE_REPLACED 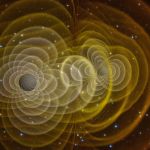 That such non-local correlations exist was proved by John Bell in 1964, and accounting for the mechanism by which distant particles or photons are correlated remains one of the biggest puzzles in quantum mechanics to this day.  In the literature on causation, most philosophers assume END_OF_DOCUMENT_TOKEN_TO_BE_REPLACED

Thought you were big enough to escape quantum superposition?  A recent demonstration by physicist Andrew Cleland and his colleagues at UC Santa Barbara suggests otherwise.  Tiny particles have always been subject to quantum effects, but many physicists were skeptical those effects could be reproduced in larger objects.  In an amazing leap, Cleland and his team succeeded in demonstrating quantum effects in an object with trillions of atoms, beating the previous record (fewer than 100 atoms) by a factor of over a billion!

Quantum mechanical experiments have long revealed that a particle can exist in a state of superposition, a state that seems to allow it to be in two contradictory states at once.  It seems as if a particle can pass simultaneously through two slits, or be in a ground state and an excited state at once, or even take two wildly different paths through an experiment.  There are many different explanations for such odd behavior (see below) but the important thing is that until now, these effects were unimaginably small.

According to a recent article in Nature, Cleland’s experiment END_OF_DOCUMENT_TOKEN_TO_BE_REPLACED