Philosophers David Albert and Barry Loewer have long argued that thermodynamics (or, more broadly, statistical mechanics) can explain the direction of time, the regularities of the special sciences, our memories, and our ability to control the future and not the past.  As if this weren’t enough, a recent article in the New York Times reports that Dutch physicist Erik Verlinde thinks thermodynamics can explain gravity too!

According to his paper, if we accept the holographic principle (very roughly: that the spatial dimensions of the universe emerge from its boundary conditions) popular among string theorists, then the motions of bodies through that emergent space END_OF_DOCUMENT_TOKEN_TO_BE_REPLACED 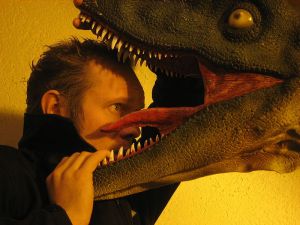 If you’re curious about the particular coloring pattern on a puffin, say, you can just go and look at one (or look at a photo someone else took of one).  If, however, you’re curious, not about a puffin, but about Anchiornis huxleyi, a small, flying dinosaur that lived between 160 and 155 million years ago (and you don’t happen to be a scientist in the movie, Jurassic Park) things are not so easy.  Paleontologists who study dinosaurs that have been extinct for millions of years are at quite an evidential disadvantage.  They have to base their theories on traces of dinosaurs, such as fossilized bones, footprints and feathers.

David Lewis argues that past events leave multifarious traces which radiate outward, like the ripples in a pond.  David Albert argues that we know such traces are reliable records because the universe END_OF_DOCUMENT_TOKEN_TO_BE_REPLACED