Besides its surprisingly good action cinematography, ‘Minority Report’ owes its huge success to the deep discomfort it created in viewers. The movie constructs a future world where law enforcement makes use of ‘Pre-Cogs’ — humans who have been given the gift of foresight through genetic modification, so that they can see crimes before they happen. When a crime is predicted, the purported criminal is promptly apprehended and the crime prevented. The movie forces the viewer to confront a host of questions that have troubled philosophers for millennia.

If the future is predetermined, in what sense can we be said to be free? Central to our commonsense conception of freedom is the inherent possibility of doing otherwise. If the future is closed to alternate possibilities, then there is no sense in which a murderer could have acted differently and then it seems that  the act of murder is not a free act. Relatedly, if a person cannot do otherwise, is there a sense in which the person is morally responsible for the action? Hume, most famously, articulated the seemingly essential relationship between the notion of moral responsibility and the possibility of freely choosing your actions. ‘Ought implies can,’ he said. One is morally obligated to act in a certain way only if one can in fact act in such a way. If the future is predetermined, then in a clear sense the murderer could not have failed to murder. But then what sense is there to the claim that the murderer ought not to murder? And if there is no sense to be given in response to this question, there is little reason to hold the murderer morally responsible. The murderer is no different from a person who happens to slip on a banana, land on an innocent bystander, and accidentally snap his neck. The person is causally responsible for the unfortunate killing, but, since the person could not have done otherwise, is not morally responsible for it.

END_OF_DOCUMENT_TOKEN_TO_BE_REPLACED 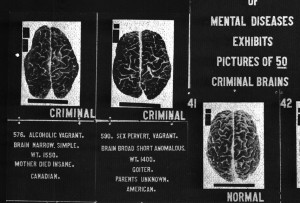 New Scientist flags a Nature News report that an Italian judge named Pier Valerio Reinotti recently shaved a year off a man’s sentence after learning he is genetically predisposed to aggression.  (Though the Nature News article is behind a paywall, you can read an excerpt on the Sentencing Law and Policy blog.)

I suppose Reinotti must have hard determinist intuitions– that is, he must believe that criminals can’t be morally responsible for their deeds if those deeds were caused by prior events.  And I suppose he must also be a retributivist– that is, he must think only desert justifies punishment, not deterrence or rehabilitation.  I wonder how common this combination of views is.  It strikes me as an especially awkward combination of views for someone charged with doling out criminal punishments.  The more he learns about genetics, biology, and psychology, the fewer people he’ll be able to punish.