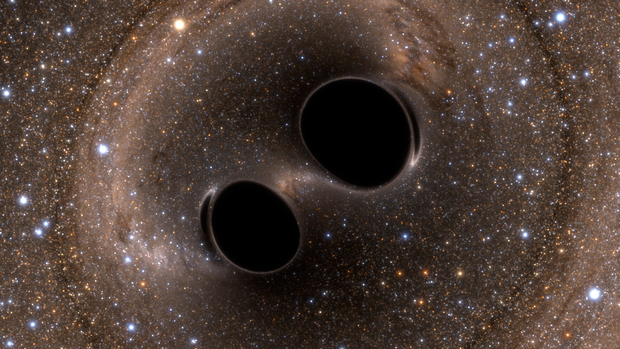 Last month, this New York Times article announced that a team of scientists “had heard and recorded the sound of two black holes colliding a billion light-years away, a fleeting chirp that fulfilled the last prediction of Einstein’s general theory of relativity.” This, according to the physicists, is the “first direct evidence of gravitational waves, the ripples in the fabric of space-time that Einstein predicted a century ago…complet[ing] his vision of a universe in which space and time are interwoven and dynamic, able to stretch, shrink and jiggle.”

This had us thinking…what are philosophical implications of this recent discovery?

For answers, we turned to Valia Allori, Philosophy Compass philosophy of science editor. Here’s what she had to say.

By now everybody knows that gravitational waves have been detected, and everybody says that this is another confirmation of general relativity. But does everybody know what general relativity is, what gravitational waves are, why they are a consequence of the theory, and in what sense the theory is confirmed by their detection?  I believe that many who believe they can answer with a ‘yes’ to the first three questions, will not be so sure about the last question. So let us talk about that, even if somewhat informally.

Commonsensically, people believe that experimental data can support theories: if the result predicted by the theory obtains (it is a positive test), then the theory is confirmed by it. General relativity is a theory according to which space-time is not a passive container of matter as Newton believed, but it will be modified by the presence of matter. Just like when a lake’s surface ripples if a stone is dropped in it, and a wave propagates outwards, so space-time ripples around matter and a wave propagates outward: these are gravitational waves. The intuitive idea is that the detection of these waves supports the general theory of relativity, it confirms it. But what exactly does that mean?

But all that glitters isn’t gold: also BCT has problems. One is that ‘old’ evidence does not B-confirm a theory. In fact, if a piece of evidence E is known, then its expectedness P(E) is going to be 1. Because of this, the posterior probability of T will not be greater than the prior probability of T, and thus old evidence does not confirm the theory. But this is extremely counterintuitive: that Mercury’s perihelion had an anomalous precession has been known for a very long time, so it was old news; nevertheless, when it was shown that general relativity could account for it, it was taken as confirming evidence for the theory. Even if this is not the case of gravitational waves, where the evidence is indeed new, it is still a problem for who is trying to figure out what this elusive notion of confirmation really is….

Valia Allori is an Associate Professor of Philosophy at Northern Illinois University. She has worked in the foundations of quantum mechanics, in particular in the framework of Bohmian mechanics, a quantum theory without observers. Her main concern has always been to understand what the world is really like, and how we can use our best physical theory to answer such general metaphysical questions.

Unique in both range and approach, Philosophy Compass is an online-only journal publishing peer-reviewed survey articles of the most important research from and current thinking from across the entire discipline. In an age of hyper-specialization, the journal provides an ideal starting point for the non-specialist, offering pointers for researchers, teachers and students alike, to help them find and interpret the best research in the field.

That such non-local correlations exist was proved by John Bell in 1964, and accounting for the mechanism by which distant particles or photons are correlated remains one of the biggest puzzles in quantum mechanics to this day.  In the literature on causation, most philosophers assume END_OF_DOCUMENT_TOKEN_TO_BE_REPLACED