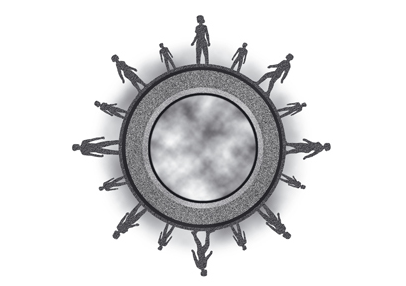 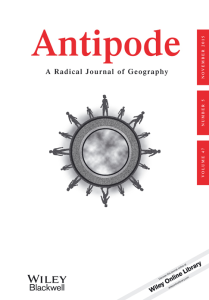 Antipode might be a radical journal of geography, but here we offer some lessons from recent history to help understand the current “crisis”. Arguably, such research is badly needed at a time when the UK’s prime minister speaks of a “swarm of people coming across the Mediterranean” and his foreign secretary worries publicly about “marauding” immigrants…

“Policing the Desert: The IOM in Libya Beyond War and Peace” (2015) focuses on an NGO, the International Organization for Migration, that aided displaced sub-Saharan migrants to return to their countries of origin in the wake of the Arab Spring, NATO military intervention, and the fall of Gaddafi in 2011. It analyses the role of non-governmental humanitarian intervention in European “surveillance, spatial control and management of mobility”, that is, the role of unaccountable international organisations in implementing state policy on the governance of personae non gratae, “unwelcome people”, before they reach “our” national borders.

“Riding Routes and Itinerant Borders: Autonomy of Migration and Border Externalization” (2015) also investigates European states “restructuring their border regimes by externalizing migration management to non-EU countries”.This exploration of contemporary migration control policies–the “off-shoring of borders”–shifts our gaze from the places that loom large in the mainstream media, such as checkpoints and camps, across space, enabling us to see practices of state “reterritorialization”. The paper develops a set of concepts for understanding these practices that should prove to be invaluable.

Bringing it all back home, as it were, “Asylum and the Post-Political: Domopolitics, Depoliticisation and Acts of Citizenship” (2014) looks at the governance of asylum seekers in the UK, dissecting practices of classification and distribution for “securing, managing and ordering” the nation. Asylum seeking has become a “problem”–as if it were a “threat” to the nation from which it needs to be secured. The dominant discourse in the UK isn’t about rights and justice but, rather, policing and regulation; it’s about risk management and the procedures ordering immigrants.

In a similar vein, “Neoliberalizing Border Management in Finland and Schengen” (2013) presents research on the “neoliberalization” of border control, tracing the development of rationalities and technologies reducing migration governance to a matter of procedure (enabling/constraining mobility, dealing with “threats”) rather than politics. And like the first two papers, it draws our attention to European policies of “pre-emption and border enforcement at a distance”–something too often overlooked, perhaps, in much of the current debate.

“State Responses and Migrant Experiences with Human Smuggling: A Reality Check” (2013) charts changing narratives of migration in the media, political dialogue and policy documents. The causes of migration have been placed beyond the pale; we might say that emphasis is now on routes rather than roots, on the fees and boats of “criminal” smugglers rather than the criminal regimes from which so many need protection. Rather than people seeking protection from terror, the smuggled are represented as a threat to be dealt with. Voice is given to them here, though, with interviews uncovering something of the experience of being smuggled and seeking asylum today.

This guest post from Antipode has been published as a part of our continued conversation on Migration and the current Syrian Refugee Crisis.

Here is our last post, Mobility is “here to stay,” contributed by the journal, Population, Spaces and Places.

As a follow-up to our roundtable webinar hosted October 16, our panelists answered audience questions that we did not have time to get to in the live session.

Remember, a recording with the roundtable discussion will be available soon!