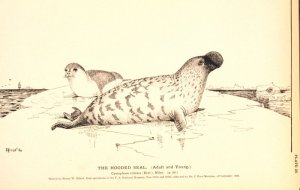 20th century Philosophy saw a burgeoning interest in modalities of sensory perception un-enjoyed by humans. And the interest is well-deserved; for it is by looking to the physiognomy of bats and dogfish that we can best test our intuitions on whether or not adequate knowledge of an organism’s physical structure can ever tell us everything that we can know about what it is like to be that organism. However, philosophers tend to gravitate towards sonar and perceptual sensitivity to magnetic fields without paying attention to whether any lessons might be learned in less weird perceptual modes. Are non-human sensory modes like sonar always wholly unimaginable, or are some such modes more imaginable than others? If we can’t imagine what it is like to perceive through sonar, for instance, can we imagine what it is like to tell an object’s shape by our whiskers?

As the Economist reports, tremendous advances have recently been made in understanding how seals detect and perceive prey whilst swimming in murky water. When an object moves about under water, it creates a signature wake that carries information about the object. This information is lost on humans; a wake is a wake so far as our sensory systems are concerned. But a series of tests on a trained seal have shown that seals are able to discriminate objects whose width vary by as little as 2.8 cm, and can also distinguish objects of a similar width yet different shape.

This ability probably falls under the realm of good old-fashioned tactile perception, yet try as I might, I cannot imagine being able to distinguish the wake of a round object from that of a square one. At the same time, however, I feel inclined to contend that we can more easily imagine what it is like to have seal whiskers than what it is to perceive via sonar or disturbances in the magnetic field. Can seals help us to better understand the conceptual barriers that seem to arise in the more extreme cases of experience? Or might we even find that spending an afternoon in the pool after not shaving for a few months uncovers unknown sensory powers in our sideburns?

Naturalisms in Philosophy of Mind

We are used to thinking of Siddhartha Gautama as having spent his life seeking to attain wisdom and the release from unwanted thoughts and passions. We are less used to conceiving of Siddhartha as having been in pursuit of a specific brain state; and yet, we might be curious as to whether or not the mental state of nirvana is a physiological possibility for us, and if so, what characterises it? What was the Buddha’s brain doing at the moment of enlightenment; what does the brain of an advanced buddhist monk do whilst the monk is nearing what we might term a pre-nirvana state?

Despite the fact that East has met West so many times in the last few centuries that they must detest being continually reintroduced to one-another, NYU researcher Zoran Josipovic (as the BBC reports) is continuing, as he has been doing for the past decade, to use fmri in order to study the neurological states of Buddhist monks. Yet in the last few years, he has advanced a compelling hypothesis. The human mind, as we know from experience, vacillates between total or near-total involvement in the external world, a state where we experience little or no self-awareness, to states that are self-conscious and self-aware to the fact that we may have little recollection of what was happening around us. Josipovic refers to these alternate kinds of experience as intrinsic and extrinsic networks.

Buddhist monks, whilst meditating, display a kind of neural activity that few, if any, non-meditating subjects have ever demonstrated: dual, equal, and simultaneous activity in the intrinsic and extrinsic networks. Of course, the relationship between these networks is by no means one of two distinct, unrelated systems– they work together to provide our ordinary, everyday experience of the world (an experience that involves some side-commentary and some focus or attention on the external world). The interesting aspect of Josipovic’s results is that, during meditation, no one system is dominant, which leads Josipovic to conclude that the resulting first-person experience is permeated both by a feeling of total involvement and oneness with the environment, and also with a self-awareness of being so utterly involved. The apparent contradictoriness of the description appears to us only because we have rarely, if ever, occupied this median neurological state.

However, we might also wonder: do we tend to over-estimate the experiential exoticness of advanced states of meditation? Is it possible that the feelings of tranquility and oneness enjoyed by advanced meditators are not so experientially different from our own, but merely prolonged? Why do we expect Buddhist monks to feel and experience the tenets of their philosophy, rather than merely to affirm them and find comfort and resilience within them? Are we filling the heads of Buddhist monks with fictional, super-states of consciousness?

Descartes explained the mechanical structure of the brain as controlling memory, association, and habitual bodily responses, but he famously denied that a machine (or anything composed of physical matter) could ever realise human language. Descartes considered it physically impossible that a physical structure could ever be capable of the spontaneity and variety of human speech.

Today, we are faced with a different, yet still fundamental question: do innate structural characteristics of the brain determine  the grammatical shape of human language? If not, then how do culture and community have the power to transmit grammatical shape across generations?

During the 20th century, this question evaded adequate answer. But in a recent study published in Nature (and discussed recently on the BBC), several psycholinguists and cognitive scientists believe that they have shown that the nativist argument– that the structure of the brain determines the grammatical shape of human language– is false. The study does this by first isolating four different ‘family trees’ of human languages– Bantu, Indo-European, Uto-Aztecan and Austronesian, and then addressing whether or not the different language structures inherent in these family trees can be explained by appeal to a universal set of rules. The result, claim the authors, is that we can far better account for the structural differences in these languages if we instead treat them as being akin to genetic traits possessed by the community of speakers, transmitted generation by generation, as opposed to being shaped and constrained by a specific module in the brain.

If the methodology of the paper is accepted, then the argument will not merely reshape our understanding of the brain, but what kinds of structures we expect to uncover in studying it. We cannot point to our hardware as limiting the shape and structure of our language in accordance to a set of universal rules. Nor can we succumb to the tempting conclusion of many otherwise strong philosophical arguments that grammatical structures cannot be learned through exposure to oral communication.

> Laws of Biology, Laws of Nature

>What Is Said, Linguistic Meaning, and Directly Referential Expressions

As the BBC reports, a nuclear survival online retailer nukepills.com, received 3,800 orders for potassium iodide (mostly from American citizens) in just 18 hours following the Fukushima disaster. The interest, however, is not limited to ordinary folk– even state governors have contacted the supplier. The idea that one might survive exposure to radiation thanks to a pill– a ‘nuke pill’– is a powerful one, far more powerful than potassium iodide’s actual capacity to stave off the negative effects of radiation.

The search for potassium iodide in countries where there is zero threat of contamination from Fukushima is telling: for people are stockpiling the pills as they would stockpile rations in anticipation of a natural disaster. Nuclear disasters are today viewed as END_OF_DOCUMENT_TOKEN_TO_BE_REPLACED

Science, we know, demands that we become comfortable dwelling within the abstract. No one can ever ‘see’ a quark or lepton, though we can listen to musical interpretations of the activity of subatomic particles. So too, the very cells that constitute our bodies are elusive; when we isolate them and direct light upon them to study them, we inevitably kill them. The less we can visualise, make auditory, or tactile the subjects of micro-science, the fewer chances are there that we will trade the mental state of wonderment for familiarity and comprehension. It may not be hyperbole to say that some of the philosophical questions that arise END_OF_DOCUMENT_TOKEN_TO_BE_REPLACED

Communication with animals is difficult. It has been over one hundred years since Pavlov, and our main form of inter-species communication remains food pellets. Philosophical aphorisms like Wittgenstein’s “If a lion could talk, we would not be able to understand him” are either shown to obtain daily in research labs, or are many years from being challenged.

Still, a study conducted by Smith and Beran, presented at the American Association for the Advancement of Science, has revealed behaviour in macaque monkeys that would seem to betoken the capacity to experience doubt– opening a window into the mental lives of these animals. 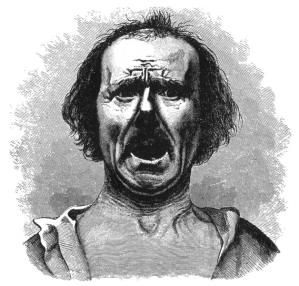 It is more than strange that while dismantling Cartesian divides between mind and body has been at the forefront of philosophy for over a century, philosophy of mind is overwhelmed with literature that presumes a mind / world relationship, in which the role of the body is often up for grabs.

This shows that the body image is not merely a representational space wherein pains are located like darts on a board; but rather that our own awareness of our bodies shapes the content of our experience. Perhaps even more compellingly, it shows that the body takes into account certain aspects of itself (apparent size) in determining the magnitude of a feeling or sensation. Yet all of this pales in significance compared to the fact that one finally has the excuse to keep a convex mirror in every room of the house.

You can read more at John Lidwell-Durnin’s blog, Consider the Bitter Gourd