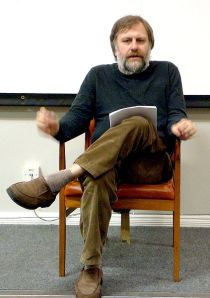 In a recent interview for the Guardian, Slavoj Zizek rubbished a large part of his own oeuvre, declaring, “All the talk and the writing about politics, this is not where my heart is. No. I have been sidetracked. I really mean this.”

Zizek also admitted to not having watched James Cameron’s blockbuster film Avatar when he wrote his interpretation of it: “I had not even seen the film, but I am a good Hegelian. If you have a good theory, forget about the reality.”

The Slovenian philosopher received a kicking on this very blog this February, for the sort of reasons listed above. But contrary to what David Killoren says, and as Mariborchan noted in a comment, Zizek is a respected philosopher in his areas of expertise (Hegel, Lacan), and has written serious philosophical treatises (The Parallax View, The Ticklish Subject). Much of his reputation as “a provocateur, not a particularly careful or serious thinker” probably stems from the playful cultural studies that Zizek also dallies in, but this shouldn’t distract one from his serious work.

Moreover, in the article in question Zizek also made an announcement likely to please those of his readers of a more sombre philosophical persuasion: a new book in the works about Hegel, with reference also to Plato, Kant and maybe Heidegger. “Already, this Hegel book is 700 pages. It is a true work of love. This is my true life’s work. Even Lacan is just a tool for me to read Hegel. For me, always it is Hegel, Hegel, Hegel”.

Zizek on Psycho (from the Pervert’s Guide to Cinema)