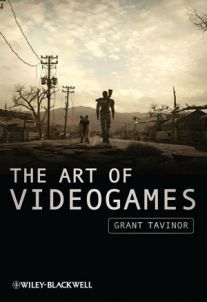 Grant Tavinor is a gamer and a lecturer in philosophy at Lincoln University. His recent book, The Art of Videogames is part of Wiley-Blackwell’s New Directions in Aesthetics Series. We caught up with Grant recently and he talked about one of the unique characteristics of videogames: that is, when you play one, you become a direct participant; an actor in the unfolding of an artwork.

The Philosopher’s Eye: Why did you decide to write The Art of Videogames?

Grant Tavinor: I wrote The Art of Videogames because I was convinced that this was a fascinating topic that it was worthwhile writing about! I’m a gamer as well as a philosopher and so was naturally enthusiastic about the topic. My interest in videogames and philosophy started when I was writing my doctoral thesis on fiction, where I briefly used videogames as an illustration of a point I was trying to make about fiction and action. Being a grad student, I had the time to play a lot of games, and I inevitably started thinking about all the unexplored philosophical issues that existed in the new art form.

Once I started to see the depth in the issues—and once I got over my hang ups about doing the philosophy of something that some people might perceive as philosophically trivial—it seemed like a natural topic to follow up. Of course, the philosophy of videogames is not really part of the philosophical mainstream, and some people express surprise when I tell them my research specialisation. But philosophers, especially philosophers of the arts, have always written about the cultural developments of their time. Videogames, because of their combination of art and digital interactive technology, seemed of intrinsic philosophical interest to me. I wanted to explore that.

PE: What’s the central concern of the book?

GT: My main objective in The Art of Videogames was to apply the theory and method of aesthetics to videogames. Videogames are now enormous in their cultural influence, and are perhaps the most significant development in the popular arts in the past fifty years. What is the nature of videogames as a form of art?

The role of the player as a character in the worlds and stories of videogames seemed to be a particularly interesting development. In videogames, unlike the traditional narrative and representational arts, you find yourself acting within the world of the artwork. How is this possible? How does it affect the artwork that results for the interaction? In the book I develop a theory of interactive fiction to explain these types of issues. I draw on a number of philosophical theories that were developed to explain artworks other than videogames, adapting them to the situation found in gaming. So, to explain the role of the player-character, I combine discussion of philosophical theories on the nature of our imaginative participation with fictions with a description the graphical depiction the player-character, to construct a theory of how the player-character plays a crucial function in gameplay, acting as the player’s fictive proxy in a gameworld.

In the book I’m also interested in what videogames can add to aesthetics. How might the philosophical consideration of videogames reflect back on our understanding of art itself? I think that treating videogames as art casts new light on a number of traditional philosophical debates. For example, the so-called “paradox of fiction” questions how it is that we can become emotional over events and characters we know not to exist. But with videogames the problem is especially vivid: how can I become emotional concerning something I did not really do? In the game BioShock, for instance, how can I feel guilty for killing a Little Sister when really I did no such thing?

PE: What sort of reaction do you hope your book will get?

GT: Besides hoping that the book would find a positive reception, I hoped that the book would further the philosophical debate around videogames. I suspected there were a number of natural connections between videogames and the philosophy of the arts, and I intended to make these connections clear and provocative. There hasn’t been much written about videogames in terms of aesthetics, and so I thought it was worthwhile to stake out a philosophical position on their nature. Being one of the first people to write about a new topic means that there are a certain number of low-hanging fruit to pick, but it also means that there are lots of initial mistakes to make. I don’t expect people to entirely agree with how I’ve set things out, and I look forward to reading their criticisms, but I think that expressing a clear philosophical position on videogames was a good thing to do at this stage of the debate.

PE: What sort of audience did you have in mind when you wrote it?

GT: I wanted to write for two groups: philosophers with potential interest in videogames, and gamers with a potential interest in philosophy. So I had in mind professional philosophers, philosophy students, and intelligent gamers as the eventual readers of the book. This meant writing the book in non-technical and plain English as far as was possible. I enjoyed writing the book in this accessible way, though it was often challenging to set out complex ideas to be easily understood but not too simplistic. To this end I also included a simple combined glossary of philosophical and gaming terms, which itself was a fun thing to write.

It’s also nice to research and write about a topic that is of interest to non-philosophers. I’ve discussed my research with a lot of gamers, written op-eds for gaming web-sites, and presented at gaming conferences. I guess this sort of connection isn’t really possible for a lot of other philosophers, and I really enjoy the opportunity to engage with general audiences.

PE: Is there another book you wish you could claim credit for?

GT: I’ve always been a fan of James Joyce, so I would love to have written Ulysses. But then I guess I would have been James Joyce, and not me.

GT: I have been working on a number of papers that explore some of the issues introduced in the book in a more detailed way. I’ve also written some papers and book chapters on interactivity and virtual worlds. I’d like to write another book on gaming though, potentially about games and morality which is a chapter topic in the book, but which I have been reading and thinking about a lot lately. I never really intended to specialise in the philosophy of videogames, but the more I look into the topic, the more I find that it philosophically stimulating.

I am a teacher. I love THINGS. THINGS are the doorway into knowledge and understanding. View all posts by Mr Cooper

8 thoughts on “Interview: The Art of Videogames”