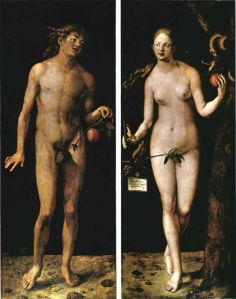 “Defining Beauty: Albrecht Dürer at the Morgan” is a new exhibition currently being held at The Morgan Library and Museum. On display are drawings, prints and illustrated books which showcase the development of Dürer’s artistic style. Works include the engravings Adam and Eve (1504) and Melencolia I (1514) as well as a copy of Dürer’s “Four Books on Human Proportion” (1532-1534).

Dürer thought that he had attained artistic perfection with a number of his works. In a letter to a patron for whom Dürer had created a woodcut he says “Please let it be as it is. No one could improve it because it was done artistically and with care. Those who see it and who understand such matters will tell you so.” Dürer obviously considered himself to be a fine judge of the beautiful even though he could not explain what it was in particular that made an artwork beautiful. In another quote he says “What beauty is, I know not, though it adheres to many things.”

Two centuries later the philosopher David Hume was similarly interested in judgments of beauty. In his 1757 essay “Of the Standard of Taste” Hume investigates whether objective judgments of taste are possible and also how these judgments might be justified. Of interest to Hume is how it is that a general consensus can be reached regarding the artistic merit of some works over others across both time and cultures (take the works of Homer as examples that have stood the test of time). Hume suggests, much as Dürer does above, that we should rely on the ability of true judges to form a consensus about the artistic merit of a work. Christopher Williams lists Hume’s five characteristics of a true judge as follows: “delicacy of taste (i.e. the ability to make fine discriminations of beauty or deformity), practice with the chosen art, comparison of the different exemplars in the art, freedom from prejudice in occupying the point of view needed for appreciation, and good sense.”

A recent Wall Street Journal article on the “Defining Beauty” exhibition points out that Dürer’s style changed throughout his career from his early Italian-style works to later Germanic-style art. This does not seem to be a problem for Hume’s theory however as this could simply indicate that different standards of judgement are required for Dürer’s works in the early and later periods.

One thought on “Defining Beauty: Dürer and Hume”