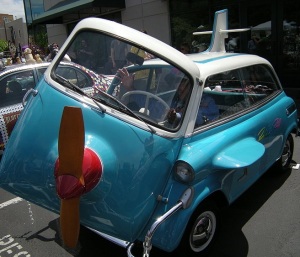 There are some things everyone knows about the future: there will be flying cars, disease will be a thing of the past and there will be regular shuttles to Mars.  Unfortunately, in this context, “the future” isn’t well defined.  For many people living in the 1970’s, the year 2010 was “the future,” but for us, 2010 seems a lot more like “the present.”  So, frustratingly, having arrived at 2010, we still have to wait for a lunar vacation.

A recent article in Scientific American laments, “10 Science Letdowns of the New Millenium.”  Some disappointments are technological: there are no flying cars, no regular flights to Mars, and no sources of unlimited, cheap energy.  Others concern failures in research: there is no cure for cancer, no vaccine for aids, and the intricate workings of the brain still baffle our best scientists.  Still other failures concern science in society: emission of greenhouse gases is still on the rise and many people reject evolutionary theory.  Interestingly, the disappointment that might have the most impact on human beings is not something we have failed to do, but something others have failed to do.  I’m talking, of course, about extra-terrestrial aliens.  SETI has yet to receive genuine radio broadcasts from other intelligences, Mars has yet to turn up life, or even fossils of long-dead life, and the search for extra-solar Earth-like planets has turned up only a few that might support life like ours.

These reflections prompt a further question: who made all these predictions for “the future” anyway?  If one goal of science is to make reliable predictions, there ought to be a science of science.  In other words, there ought to be scientists who study scientific progress and who make reliable predictions about what we can expect from science 10, 20, 50 and 100 years from now.  Then, we’ll finally know if there will be aliens joining us for dinner on our lunar vacation in 2025.

The Psychology of Scientific Explanation

The Paradox of Confirmation